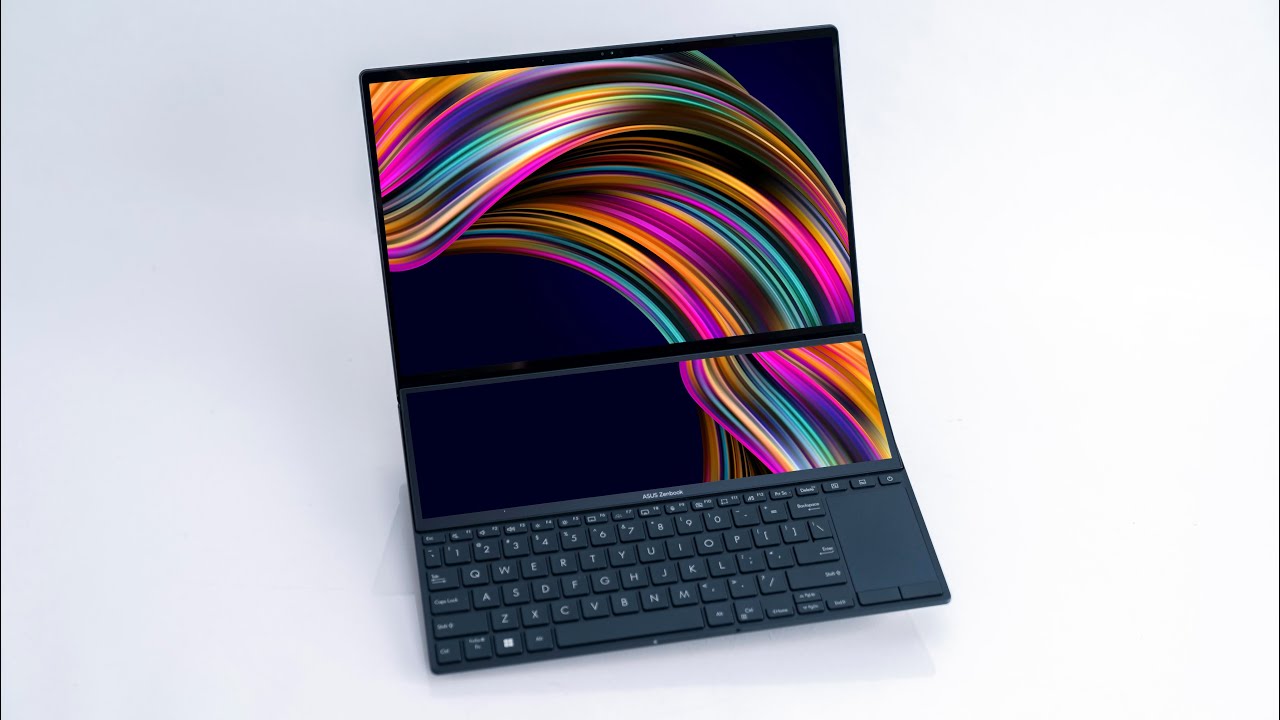 “The Asus Zenbook Pro 14 Duo OLED is the most polished version of its dual-screen concept yet.”

You wouldn’t think a product like the Asus Zenbook Pro 14 Duo could last more than a generation. It’s a fun dual-screen experiment, sure. But a successful laptop that would spawn years of iteration? That it is exactly that should tell you this is far more than just a gimmick.

The new model makes some refinements – all for the better. This sleeker, more immersive, and more powerful iteration of the Zenbook Pro 14 Duo continues to double-down on the idea of a dual-screen laptop. And ya know what? It’s still not perfect, but I’m finally starting to come around to the idea myself.

The Zenbook Pro 14 Duo is one unique laptop. Closed, it looks like any other laptop. The redesigned Asus logo graces the lid, but it’d hard to pick it out from a lineup of other black Asus laptops.

But pull the lid open, and you’re immediately greeted by some extraordinary elements – most notably, a secondary screen, built right into the keyboard deck. The ScreenPad Plus, as it’s called, tilts up at an angle, and forces the touchpad and keyboard down below.

None of this is new to the line, of course, but there are a number of improvements that Asus has brought to the table this year. Notably, Asus has made the ScreenPad Plus is a bit larger by removing some of the bezel around the screen. The 32:10 secondary screen now measures 12.7 inches across, with a resolution of 2880 x 864. It also tilts higher, up to 12 degrees, giving you a better view of the screen and more seamlessly connecting it to the main screen above. This results in a more impressive and, ultimately, more useful secondary screen.

Of course, whether you actually buy into the idea of the need for a second screen on your laptop is up to you. There’s the cool factor of it all, yes, but you’d better have some ideas of your own for how you envision yourself using a feature like this. I say that because Asus doesn’t provide many ideas itself. The only stock ScreenPad applications are a simple calculator, a handwriting app, and some basic navigation. That’s pretty much it.

Previous versions of the Zenbook Pro 14 Duo also included an ErgoLift hinge, which propped up the bottom of the laptop. This is now gone, which I am happy about. The ErgoLift was supposed to provide a natural incline for comfortable typing and improve airflow, but between it and the tilt of the ScreenPad Plus hinge, it was rather unsightly. More than that, it felt like a lot of moving parts that could be easily damaged. It’s all been replaced with a simpler and more structurally sound design that sits flat on the table like most laptops do.

The Zenbook Pro 14 Duo is an exceptionally well-built machine. You’ll be hard-pressed to find a weak spot in the design. That’s impressive given the amount of complexity that’s introduced by the ScreenPad Plus.

Even still, Asus managed to keep the chassis fairly trim. It’s 0.70 inches thick – which sits right in between the thicker Surface Laptop Studio and the thinner MacBook Pro 14-inch. In terms of weight, it’s a similar story, sliding into the middle of the pack at 3.74 pounds. Yes, it’s slightly chunkier than the standard Zenbook 14 Duo – but it also manages to be significantly more portable than the Zenbook Pro Duo 15.

I love what Asus did with the ports on the Zenbook Pro 14 Duo. With the ErgoLift hinge out of the way, this design puts a few important ports on the rear of the machine – taking a cue from modern gaming laptop design. But unlike those, the Zenbook Pro 14 Duo doesn’t feature a large, protruding cap behind the display, like what you’ll find on the Alienware X14 or the Lenovo Legion gaming laptops.

And yet, the Zenbook Pro 14 Duo manages to include HDMI 2.1, the barrel power connector, and a Micro SD card slot. Having the HDMI and power accessible from the back is far more convenient and clean than on the side. There’s no wondering which side which port is on or reaching the power cable across the table.

The left side of the device is where you’ll find the 3.5mm headphone jack. The right side includes all your USB, which includes two USB-C Thunderbolt 4 ports and one USB-A port. The Thunderbolt port can be used for charging, though the proprietary charger connected to the included 180-watt brick will deliver the best performance.

This would be the perfect setup, if only Asus had swapped the microSD card slot for a full-sized 1. The Zenbook Pro 14 Duo is a laptop meant for creatives, and being able go directly from camera to laptop, like on the MacBook Pro, XPS 15 or Razer Blade 15, would have been ideal.

Asus has been on a tear with support for OLED screens, and the Zenbook Pro 14 Duo is no different. It features a 14.5-inch OLED panel with an aspect ratio of 16:10 and a resolution of 2880 x 1800. That’s not quite as pixel-dense as the MacBook Pro, but it’s a huge upgrade over the 1080p options. It’s also an attractive alternative to springing for the 4K models Asus sells, which are overly expensive and power-hungry. And besides, this is plenty sharp for this size of screen.

One of the biggest new features of this display is its fast 120Hz refresh rate. When it was announced, the Zenbook Pro 14 Duo was supposed to be the first OLED laptop screen with a refresh rate of over 60Hz — but Razer has already announced a Blade 15 with a 240Hz OLED screen. But this isn’t a gaming laptop — and let’s be real: 120Hz is the perfect refresh rate for a laptop of this kind. Animations in your day-to-day are silky smooth, and in lighter games, and you’ll even experience those smooth animations in-game. It’s a fantastic addition to see on non-gaming laptops, following laptops like the Surface Laptop Studio and MacBook Pro. Even Lenovo’s Yoga 9i 14 features a 90Hz OLED panel.

This screen is also killer in terms of image quality. We’re talking as perfect color saturation as you’ll find on a laptop screen (100% sRGB and 100% AdobeRGB). Color accuracy isn’t far behind with a Delta-E of 1.18. That’s accurate enough for professional color grading and photo editing — and you can even adjust the tint to your liking in the MyAsus app.

More than that, you get the true blacks and extreme contrast that only OLED can produce.

Like many OLED laptop panels, though, the Zenbook Pro 14 Duo suffers from being overly reflective. If you have some windows at the back of your office, don’t be surprised when they make parts of the screen hard to see.

The ScreenPad Plus has also benefited from some upgrades this time around. It also has a 120Hz refresh rate, which is important for inking. A faster refresh rate means even less lag between the movement of your stylus and the response of the screen. You can feel the difference, and the fact that Asus managed to include two 120Hz screens in this laptop is certainly praiseworthy.

There’s really only one major problem with the ScreenPad Plus: It doesn’t match the primary screen. The most notable difference is that the ScreenPad Plus has a matte surface, while the primary screen is glossy. The reason is obvious, of course – to mitigate reflections from overhead lights, which it is very effective at. Another issue is with scaling. Windows doesn’t allow the ScreenPad Plus to scale beyond 150% – and for whatever reason, the screen scales down all the UI elements. The cursor is itty-bitty down there and poking around the smaller navigation with your finger feels clumsy.

Both of these inconsistencies between the panels lessen the continuity of moving windows between screens or extending one window across both.

All in all, it’s just the nature of the beast. A screen that’s not flat is always going to have problems in terms of viewing angles, regardless of all the good things Asus has done to attempt to jump that hurdle.

The “Pro” in the Zenbook Pro 14 Duo largely has to do with performance. Like many 14-inch laptops, there’s enough room here to include both a powerful processor and a discrete graphics card. Examples include gaming laptops like the Razer Blade 14 and ROG Zephyrus G14, but also professional consumer devices like the 14-inch MacBook Pro, Lenovo IdeaPad Slim 7 Pro, or Surface Laptop Studio. Heck, Asus has even managed to squeeze discrete graphics into 13-inch laptops like the ROG Flow X13.

All that is to say that the Nvidia RTX 3050 Ti included in the Zenbook Pro 14 Duo makes it a powerful little laptop. And that’s important for a laptop with two screens, which many people may imagine themselves using with applications like the Adobe Creative Suite. This Pro model makes that more possible, especially when you throw in the Core i7-12700H, a 14-core processor that’s proven to be an excellent performer in these types of workloads.