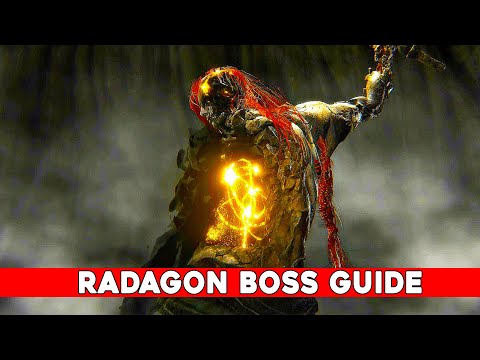 You’ve come so far! After taking down Godfrey, it’s finally time to venture through the doors of the Erdtree. Fittingly for a game as consistently punishing as Elden Ring, the “final boss” is really two bosses back-to-back. The first one you’ll encounter within the smoldering trunk is Radagon of the Golden Order, the other half of Queen Marika and second Elden Lord.

Like all of the toughest fights in From Software games, taking down Radagon will require patience, concentration, and–more likely than not–dying a few times. Learning the attack patterns and getting comfortable is more important here than in any other fight in the game, as you’ll be thrown right into the next boss arena without a chance to rest after defeating him. Here’s everything you need to come out the other side Elden Lord.

What to know before going in

Just getting to Radagon requires defeating many of the hardest bosses in the game, so you should naturally be at a high level by the time you reach him. To make the experience as painless as possible, aim to be around level 150, with at least 40 points invested in Vigor to avoid getting one-shotted.

Going into the fight with a leveled-up Spirit Summon can make a world of difference. You want something beefy enough to draw aggro and survive a few hits from Radagon while you regroup and refill HP. Per usual, the Mimic Tear Ash is a reliable choice, even post-nerf. (Note: If your Spirit Summon dies here, it won’t be around to help with the follow-up boss. If you’re feeling confident, you can take on Radagon solo and hold off on your summon).

Many of Radagon’s attacks deal holy damage, so consider stocking up on Holyproof Dried Livers or equipping Divine Fortification incantations before going in. In addition, being a God boss, he is significantly weak to Godskin magic. Black Flame incantations can be a big help if you have the faith required to use them.

How to beat Radagon

Luckily, most of Radagon’s attacks are fairly well telegraphed, even if they do massive damage when they land. Some of his attacks can be effectively blocked with the right shield, but, for the most part, you’ll be better served dodge-rolling your way through the fight. He is more easily staggered than you might assume, so always be ready to get off a critical hit.

It takes a moment for him to notice you when you first enter the arena. Take advantage of his vulnerable state to get in a free attack or two. Here are all the moves to look out for during phase one:

The rest of his attacks during phase one should be easy to avoid with a little practice. Block or dodge through his hammer swings, and roll sideways out of the way of his forward stomps.

Once you’ve taken out a third or so of his health bar, he will add some new devastating attacks to his repertoire. Most notably, be on the lookout for the following: